Canada’s capital is the perfect place to explore the history, culture and heritage of Indigenous Peoples. They considered the region an important meeting and trading location—in fact the name Ottawa is derived from the Algonquian word “Odawa” which means “traders”.

Their important stories are told through museum exhibits, tours and authentic experiences that you won’t find anywhere else, and many of which are Canadian or Ontario Signature Experiences. Discover the true cultural roots of Canada by exploring some of Ottawa’s Indigenous programming this March Break and through the entire month.

Start your journey at the Canadian Museum of History, a cultural gem located across the Ottawa River in Gatineau, Quebec. Canada’s Indigenous legacy is presented throughout Canada’s most visited museum. Start by admiring the building itself, which was designed by Anishinaabe architect Douglas Cardinal, and the stunning views of Parliament Hill. (Museum currently open Wednesday through Sunday)

Inside, walk through the museum’s stunning Grand Hall and admire the largest indoor display of totem poles in the world. Learn the history, diversity, creativity and resourcefulness of First Nations, Inuit and Métis People in the First Peoples Hall. And see how Indigenous stories are weaved into the country’s narrative in the Canadian History Hall—the largest and most comprehensive exhibition about Canadian history ever created.

Back on the Ontario side of the Ottawa River, you’ll find the world’s most comprehensive collection of Canadian art at the National Gallery of Canada. Explore the Canadian and Indigenous Galleries to see the country’s story represented through ancient Indigenous artifacts, religious pieces from New France, Group of Seven paintings and modern Inuit sculptures. (Currently open Wednesday through Sunday, as well as Monday, March 14 and Tuesday, March 15 for March Break.)

For a glimpse into the Canadian North, visit the Canada Goose Arctic Gallery at the Canadian Museum of Nature, located a few blocks south of Parliament Hill. The space highlights the people, landscapes, plants and animals of this northern region. The Beyond Ice multimedia experience features animations and sound that are produced by Inuit artists and projected on real blocks of ice that visitors can touch. And the Northern Voices Gallery features changing exhibitions curated by Northern communities. (Currently open Wednesday through Sunday)

If you are exploring Ottawa between March 25-27, 2022, join Indigenous Experiences at their Mādahòkì Farm to celebrate the SĪGWAN (SPRING) Festival, in the context of Indigenous culture.  Learn about Indigenous traditions, enjoy authentic Indigenous programming, an Indigenous Makers and Farmers Market, interactive creative workshops, culinary delights and meet the rare Ojibwe Spirit Horses - fun for young and old. The Festival is FREE; advanced registration required.

In the evening, consider attending a performance at the National Arts Centre (NAC), home to the first national Indigenous Theatre department in the world. The presentations are based on, performed by, or created by Indigenous artists, and they’re performed in English, French and multiple Indigenous languages. From March 16-20, a celebration of Inuit artists, art and film called qaummatitsiniq nunarjuamit qaujimajakkanik - lighting up the world with my knowledge, is presented. Featuring a selection of short films broadcast on the Kipnes Lantern, this free “mini-film festival” also includes a panel discussion, virtual tours of Inuit artists’ studios, and other fun events. Films will be shown in the evenings

Immerse yourself in Canadian wilderness at Omega Park, less than an hour's drive east of Ottawa in Montebello, Quebec. Take a safari through the 2,200-acre (890-hectare) nature and wildlife preserve to see Canadian animals in their natural habitats. Then explore the First Nations Trail which highlights the 11 First Nations of Québec through sculpted totems and other installations. The trail is open year-round.

Back in Ottawa, take a stroll to see some meaningful installations. Just east of the National War Memorial, the Valiants Memorial pays tribute to important figures in Canada’s military history. You’ll see the bust of Thayendanegea (also known as Joseph Brant), a Mohawk warrior who settled in Ontario after supporting the British during the American Revolution.

Visit the Canadian War Museum for an overview of Canada’s military history, including conflicts involving Canada’s First Peoples before and after European contact. Exhibits throughout the museum profile how the country was shaped by wars between the First Peoples, the French and the British. (Currently open Wednesday through Sunday

Just west of downtown, across from the Canadian War Museum at LeBreton Flats, is the small but meaningful Pindigen Park. The site reflects the Anishinabe philosophy of harmony between people, land, water and earth. These elements are represented in illustrations and steel silhouettes of Canadian animals, and explained on interpretive panels in Algonquin, English and French.

Take a 5-minute walk to view a set of water cascades and islands between the provinces of Ontario and Quebec. Indigenous peoples, who used waterways as main transportation routes, called the mighty Ottawa River “Kichi Sibi” (or “great river”) and considered this particular area a sacred site. The Algonquin named the falls “Akikodjiwan” because the natural formation resembled a cauldron, and the term was translated by early French explorers as “chaudière”. The Chaudière Falls were dammed in the early 1900s to produce hydroelectricity for the on-site lumber mills. The operation has since been modernized to be eco-friendly and protect wildlife such as endangered American eels. Part of the site is being made accessible to the public as a mixed-use development project called Zibi which includes park spaces such as Pangishimo Park (meaning “sunset”). 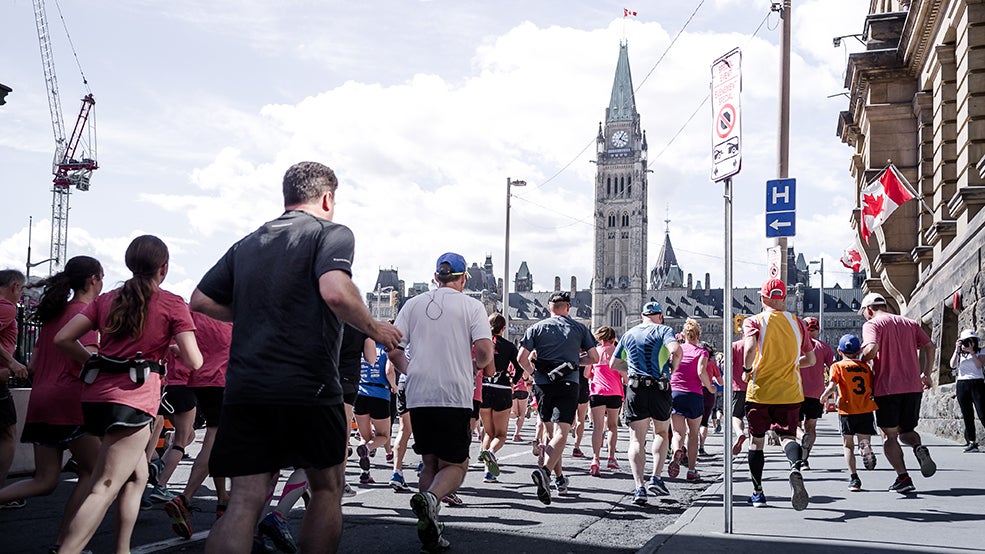